Spiritfarer is a management game that follows Stella and her cat, Daffodil, as they go island to island on a large ship, helping lost spirits pass on. OnlySP sat down with Jo-Annie Gauthier, the art director at Thunder Lotus Game, to play through the demo at PAX West 2019. While I controlled Stella, Gauthier controlled Daffodil.

The game’s art style is stunning. The game features 2D art and all of the characters are smoothly animated. Gauthier pointed out that both Stella and Daffodil have separate unique floating animations when the player holds down the button to slowly glide. Stella uses her hat as a parachute while Daffodil hilariously balloons up like a pufferfish while descending. The first character encountered was a snake spirit named Summer, who wants a place to focus on her energies before passing on. As the player docks the ship and arrives in town, Summer clarifies that she wants a “nice mediation room, with nice plants and natural materials.” Here, the game teaches the player how to construct new buildings on the ship. For the purposes of the demo, the materials to build Summer’s new house had already been acquired. Players are able to rearrange buildings at no cost, allowing them to try out what kind of platforming they like the best.

When returning to the ship, Summer was happy about her new house, but requested one more thing before passing: she wanted to go to Hummingberg Village to see the town square and retrieve a lost family heirloom. Here, Spiritfarer introduces the map system. The demo had already marked Hummingberg Village with a question mark, but in the final release, such marks will not be present; players will need to select the general direction on where they want to go and hope to stumble across their intended destination, like a real ship captain.

Hummingberg Village was quite a trip, so in the meantime, Stella spoke with some of the other spirits that were on board. Atul, a frog spirit, requested that Stella try to fish. In the fishing minigame, the player have to repeatedly press a button (X on Xbox One) to reel in any hooked fish. When the line turns red, the player must let go or the line will snap. A deer spirit named Gwen gave Stella a request to plant seeds in the ship’s designated garden section. Stella has the Everlight, which is some sort of glowing item that morphs into anything she needs, such a watering can for the seeds. No immediate benefits to the gardening were evident, though it will likely have more relevance later in the game. 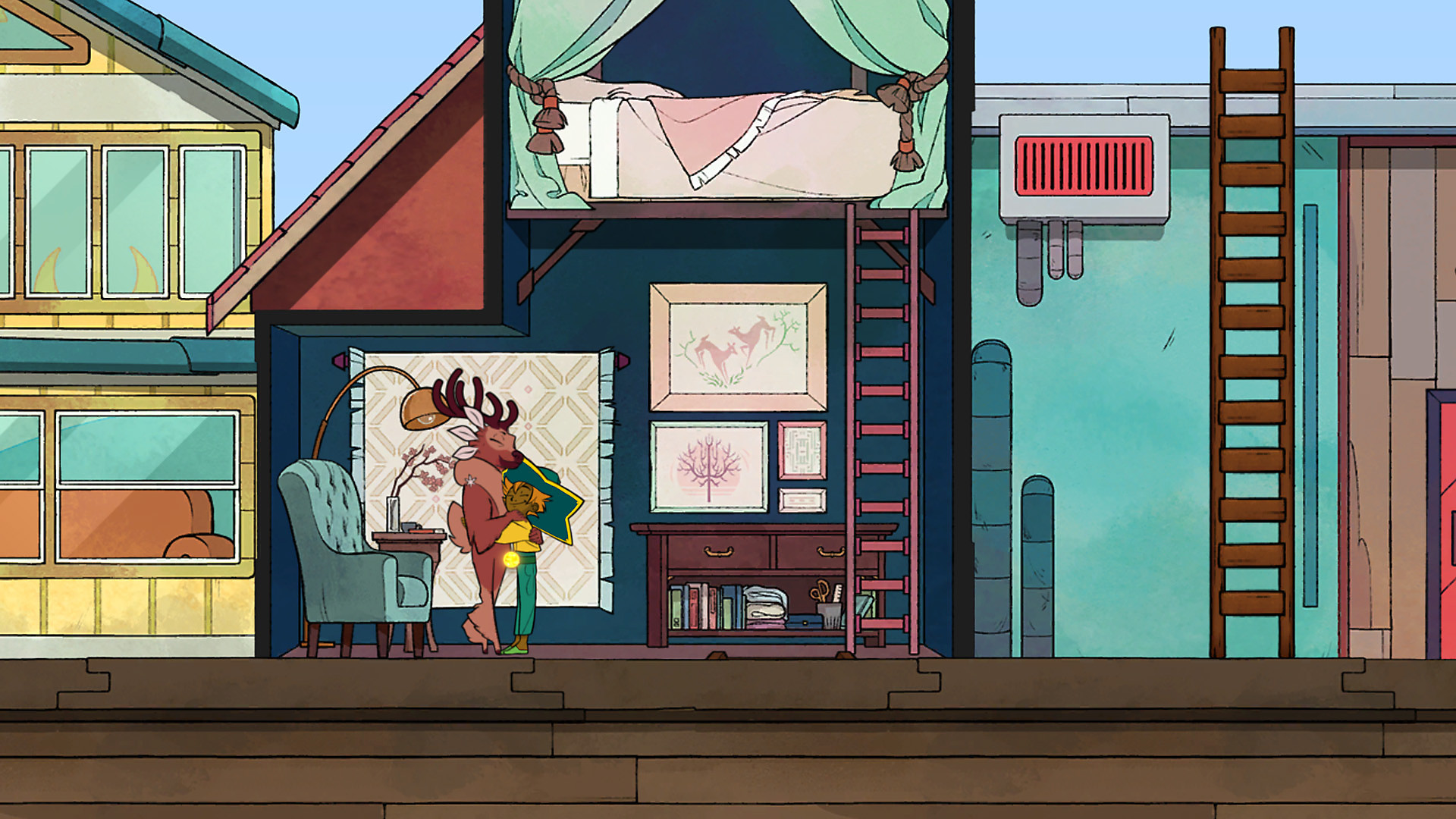 As more time passed, the sky became darker and rain began to pour. Atul said that Stella’s Everlight will protect her from lightning strikes, prompting another minigame where Stella has to stand underneath lightning strikes to absorb them with her Everlight. I jokingly asked Gauthier if she took this idea from Final Fantasy X, which had a similar idea…

After this, we finally arrived at Hummingberg Village. In front of her old house, Summer said that this was where her family heirloom was located, but could not seem to find it. The camera panned out slowly to show an item on the roof. Summer also subtly suggested that Stella toss a coin into the big shrine in the middle of the city for some good luck. With that, the player is granted the ability to double jump. With this newfound power, Stella made my way onto the roof to nab Summer’s heirloom.

Returning to the ship, Stella plotted course on a new destination past Hummingberg Village. On the way there, she also learned how to cook; using the fish she caught earlier, Stella received the recipe on how to make grilled fish.While burning the food is possible, the timing on grabbing the finished food is not as strict as other games with similar mechanics. Eventually, the Spiritfarer demo ended with Summer, Gwen, and Atul at the front of the ship, while a fog encroached around it. While helping spirits pass on, the player learns more about them. Gauthier said that as spirits pass on, they also pass on their knowledge. For example, a spirit who was a master lumberjack will provide its knowledge of woodcutting after it passes on. With the game’s lack of combat, this feature allows relationships to flourish between the player and the game’s spirits. Gauthier also mentioned that the main game will have a 30 hour main story, and if players want to earn all of the achievements, they should be prepared to sink 100 hours into the game. Spiritfarer’s tone is strange, since it is a game about death, but no killing or violence is involved at all. However, in a game with such dark undertones, to see it represented in a positive way is refreshing, especially with such charming characters.

Spiritfarer debuted at E3 2019 on Microsoft’s press conference, and the game’s creative director Nicolas Guérin mentioned that Spiritfarer is inspired by Greek myth, particularly the legend of Charon.

For all the latest on the game and much more from the world of single-player gaming, be sure to bookmark OnlySP and follow us on Facebook, Twitter, and YouTube. You can also join the discussion in our community Discord server.

Call of Duty: Modern Warfare Will Return to the Series’s Tactical Roots

The Mega Drive Mini Is A Welcome Blast From The Past