It’s okay – for those of you thinking this game is designed to make learning mathematics more fun, don’t worry, there are no sums or trigonometry to be found here. In short, Geometry Wars 3: Dimension is awesome.

If you played Geometry Wars: Retro, or Geometry Wars: Evolved, you will know the concept of the game. However, in case you don’t, the idea couldn’t be simpler: you’re a drone, you fly around and shoot different shapes (that’s the geometry part), and you try not to get killed by the shapes by not letting them hit you. The previous Geometry Wars games, such as Retro and Evolved, had only one goal for you to achieve: 1 map, 3 lives, 3 smart bombs (an extra power that wipes out all the shapes on the map), get the highest score you can 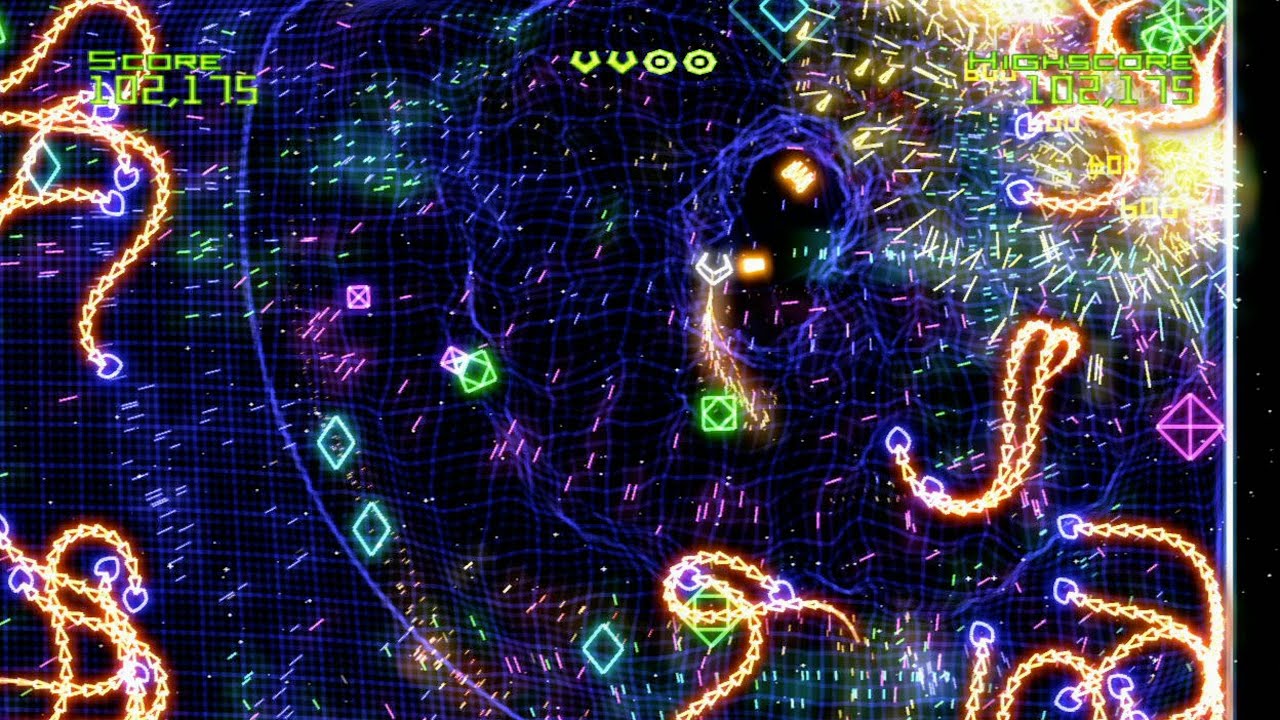 This idea was very repetitive, but it was still really really fun. Geometry Wars 3: Dimensions has taken this much further to make the game more diverse and give it more variety. You can still play the classic modes of Geometry Wars, but the main attraction of this game is the adventure mode, in which you play a range of levels earning as many stars as you can – with three available per level – in order to progress to the next stage. Modes that you encounter in the adventure include Deadline, where you must reach the target high score before the time runs out; Checkpoint, where you clear waves in order to get extra time; Titan, where you must reach the high score with only one life, and more. At the end of each stage is a boss level, in which you have one life to kill the boss as they make you deal with waves of enemies and obstacles.

The great thing about the boss levels is that they aren’t so hard that they induce controller throwing, but they are challenging enough to be fun and exciting, giving the gamer something to aim for. The game makes you want to progress.

Each level takes place on a different map: a certain 3D shape, such as a globe, a curved cylinder, or a cube. But there are other flat shapes such as the classic squares and hexagons or others where the corners are curved to create a little extra space. Each level offers a different challenge for you to keep an eye on the action as you both shoot and swerve in a mayhem of obstacles. Some levels will require you to simply stay out of the way of your enemies, while others will also make you navigate around various obstacles as well. This game is diverse, perhaps a little too diverse – at times it is difficult to adapt to each new level and new shape, but it’s not a huge problem.

With regards to the enemies of the game, there are many that will be familiar to players of previous Geometry Wars games. However, there are also a few new enemies to keep you on your toes.

Another new feature to this game is the companion, a smaller drone that follows you and helps you. There are several drones, each with its own unique ability, such as attacking enemies with you, giving you extra firepower, collecting power ups for you so you can concentrate on shooting, or sniping far away enemies clearing a path for you to navigate. There are also power ups such as the smart bombs, but there are others such as the ability to lay mines, send out homing missiles, turrets, black holes, and more. The trick to the game is to find the best combination to give you the best chance of completing each level. This game is never boring

The gameplay is fantastic, it sticks to its foundations of shoot and score high, and builds all its other features around this. It also looks great; it’s vibrant, it’s colourful, and in staggering clarity at 1080p. Above all, this is an arcade game, more than half the price of a disc console game, and is worth every penny. This is a game that will keep you coming back for more. When you’re stuck on another game, or need a break, come to Geometry Wars.

Just in Time For Xmas: Buy 2, Get 1 Free Game at Best Buy

Take a Listen to the Beautiful Soundtrack of The Order: 1886