E3 can’t come quick enough. Far Cry 4 was announced today via Ubisoft and has been confirmed to be set in the Himalayas, in a location known as Kyrat. While there’s not a lot of information to go on, the game is set to have a huge reveal at this year’s E3 but that doesn’t stop us from mulling over just what we’d like to see in the sequel to this top notch series. Let’s discuss.

Far Cry 3 was a fantastic game. It felt like this was the game that Ubisoft Montreal wanted to make since 2 and they had finally achieved their vision. Far Cry 3 really took the open world setting and crafted a world that you could lose yourself in again and again thanks to the exotic environments, non-intrusive crafting/hunting (that you actually wanted to do) and of course,  one of gaming’s best villains in recent years. The game was an open world adventure that rewarded you endlessly, gave you multiple options to play how you want and most importantly was damn fun to play with. After the huge success of the game, Far Cry 3 led to one of my favourite DLCs since Undead Nightmare.

Blood Dragon was the bones of Far Cry 3’s main game but soaked in neon,  filled with dragons firing laser beams and littered with 80’s reference after 80’s reference. What many thought to be an April Fools joke was in fact one of the most impressive DLCs and it really showed how Ubisoft were willing to let a side project become a fully fledged game, one that became a huge success commercially and critically. Overall, Far Cry 3 was a huge success for Ubisoft and is still a fantastic adventure that I urge every gamer to experience.

So where does that leave Far Cry 4? With some pretty big shoes to fill, the game has a lot cut out for it but can it achieve it? The first priority for Far Cry 4 in our opinion ought to be tone down the multiplayer. I’m sure there’s a band of gamers out there loyally playing the multiplayer in Far Cry but these modes are not nearly as impressive as the single player experiences. The crux of many games these days is to include multiplayer to prolong the experience. However, multiplayer focus should not be key for Far Cry 4.

That does not mean to get rid of a multiplayer aspect for the game altogether. To do so would mean getting rid of Far Cry’s fantastic map editor which I know many fans of the series love to play around with and craft maps that are either impossibly crazy, perfect replicas of pop culture or downright masterpieces. I absolutely love the map editor in the series and to do away with would be non-sensical.

However, to take the map editor one step further is key and implementing a form of User Generated Mission/Race/Challenge would be absolutely fantastic to keep players coming back for more.  Sure, you can still include multiplayer deathmatches for Far Cry 4 but it shouldn’t be practically half the game like it was in 3. Allow for users to take control of the map editor but apply to single player components not just for online team matches but rather challengers or races or even story missions. That’s the way to bring back more people to your game because it’ll add a whole new layer to the replayability to the series. 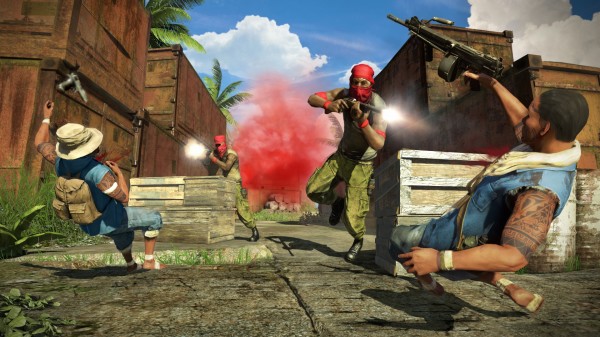 Moving on, the only other problem I had with Far Cry 3 was its characters and story. For a good chunk of the game, Far Cry 3 delivers a fantastic story. You’re immediately exposed to some violent twists from the get go and the whole premise of being an innocent college kid turned into ruthless tribal warrior is a fantastic premise and one that, for the most part, was done very well. The introduction scene which was practically a music video of the main character and his mates being rich stuck-up college kids all set to M.I.A.’s Paper Planes was perfectly cringey, which makes their introduction to this chaotic landscape all the more dramatic.

I haven’t even mentioned the game’s villain Vaas who stole every single scene he was in. His wild, unpredictable personality left me on edge and at times, genuinely terrified to be around him. He was a perfect villain. But come two thirds of the way through the game, things start to go a bit downhill. You’re introduced to a brand new villain who is nowhere near as compelling, there’s a whole military faction to deal with (as opposed to crazy pirates) and then you’ve to continue saving your friends who, at times, you’d rather just leave to rot because of their stereotypical “bro” cardboard cutout personalities that you’ve seen a million times over. Far Cry 3 had some great moments with its story but ultimately stumbled before the finish line.

Far Cry 4 does not necessarily have to exactly follow suit with the whole “college student turns Rambo” story but it would be interesting to see them approach it again with a different outlook. The story in 3 matched perfectly with the gameplay because the more you played the game, the better you got and therefore, the better the main character Jason Brody became at killing people which was reflected in the story. It was a perfect synch that I’d love to see done again in 4. Could we have a story about a villager who has to turn to a life of being a hunter? Or even a tourist who is caught up in the chaotic world around him? The game is set to feature a “despotic self-appointed king” so it’s obvious there’s going to a “royal” faction stirring up trouble for everyone else. From what we’ve seen from the initial promo image is that the potential villain is a blonde 30 something who is sitting on a broken Tibetan statue sporting a garish pink suit with an RPG, assault rifle and hunting knife at his side. In terms of looking as manic as Vaas? This guy has it down.

In terms of side-characters, there’s not a lot known and I honestly think they should be limited. There was too many boring side-characters in 3 that had zero personality so maybe 4 can inject some personality into potential side-characters. Stereotypical character are fine once you build on from them. You should add something new to that helps them form their own character rather than stick to the same characters personalities we’ve seen a thousand times over.

Far Cry 4 is set to introduce elephants that you ride on. As fun as that sounds, I think there should be a development from this and include not just elephants, but other animals aswell. Perhaps horses could be added? Heck, maybe even a snow leopard if you complete the game 100%.  I think the elephant aspect might be more of a gimmick than a useful one but it will be interesting to see how it plays out. In terms of vehicles, I really think Far Cry 4 should go all out. I’d love to see everything snow related from snow mobiles to snow boards. I loved the wingsuit in Far Cry 3 and it added an almost “extreme sport” feeling to the game where you would journey to the top of a high hill, climb a tower and then deploy your wingsuit at 90 mph. It was an absolute thrill that I would love to see re-created in Far Cry 4 but maybe with a snowboard or skis on the Himalayas? I feel that if there’s going to be snow in the game, it would be a shame not to take advantage of those icy slopes.

And my final wish for Far Cry 4 is to bring back a sense of realism. I was one of the few who missed the realistic map in Far Cry 2 where you could take out a paper map and compass to see where you are. It was a neat,charming touch that I really missed in 3. I also missed repairing your jeep’s engine if you smashed it up too bad because again, it was a realistic aspect that was a consequence for your crappy driving. However, I won’t miss the malaria and gun jamming because they didn’t add a sense of panic like a busted engine did but rather an angry sigh of annoyance. The game mean well to include them but they were no fun at all.

For Far Cry 4, I would love to see stuff like using a knife to cut vines in luscious jungle areas or use goggles if there’s a snowstorm that is too intense. Realism doesn’t have to go overboard for every single aspect of the game (i.e. hunger meter, hydration meter) but rather in parts that could lead to some interesting mechanics. Maybe if you go swimming in a cave, you have to leave behind your weapons in a boat like Assassin’s Creed IV? This would mean you’d have to use stealth or other tactics and play a little bit differently than just going all out. Is there a realistic aspect you’d like to see in the game?

Finally, if there’s one thing to be said about Far Cry is that it has some of the best hand animations I’ve ever seen in a game. You constantly see the main character look at his hands/arms, either by healing them by popping a bone back in place or shielding himself from flames. If the game was to include even more animations, I’d be extremely happy. From placing hands on the bars of a snowmobile to turning a key in a car or tightening your grip on a paragalider or the reigns of an elephant’s saddles; Far Cry 4 should include even more hand animations that adds a much appreciated level of realism to the gameplay.

So that’s we’d love to see in Far Cry 4. More vehicles, more animations and maybe more realism. But what about you? What are you hoping to see included in the game, be it far-fetched or perfectly plausible? Let us know in the comments below. As always, you can follow us on Twitter or like us on Facebook to get the latest updates on even more editorials.