Instead of looking for a fresh start, the team behind BioWare’s upcoming title Dragon Age: Inquisition is unapologetic about their previous efforts and won’t let audience apprehensions hold back their vision for the third major title in the series. Creative Director Mike Laidlaw said to Game Informer, “A lot of the decisions we’re making are about Dragon Age and what this generation of RPGs will look like.”

The physical appearance of Dragon Age is one of the things that will be overhauled as they settle in to EA’s company-wide policy to use the Frostbite Engine for its non-sports games. Not that that is a bad thing, though. BioWare’s previous engine, Eclipse, would have had trouble handling the larger open areas and the massive amount of interactive objects that will be available in Inquisition. Don’t expect Dragon Age to play like Battlefield 4 though, the team spent a considerable amount of time turning the Frostbite Engine RPG-friendly.

Other than the underlying engine, many other gameplay mechanics from both Origins and II will make it into the game. BioWare has listened to the positive and negative comments of the previous installments and has let those comments influence how they’re creating the game. Players missed the pause-and-play aspect of the first game, so BioWare is upping the tactical gameplay for those who want it. Different opponents have different weaknesses, and it seems like things will be made more interesting by changing how the enemies interact. For instance, a shielded opponent will go out of his way to keep his ranged friend protected, keeping you at bay while the bowman whittles down your health. By keeping things mixed up, the developers are trying to get away from the age-old RPG adage of sending reinforcements to make a fight more difficult instead of presenting all opponents at once.

From II, they are keeping the skill and ability trees which were much more pleasant to look at than Origin’s spreadsheet-style character pages. Upgrades made more sense and there was a sense of accomplishment when an ability was fully maxed, as opposed to just ticking the boxes of the most useful abilities. For fans of the quicker pace, the game will allow a more action-oriented playstyle as well. We somewhat saw this in Mass Effect 3 with the starting choice of if you wanted a story-based game where the difficulty is set to easy but the dialogue choices were yours, an action-based game where the difficulty was set higher but the dialogue choices were done as cutscenes, or the full experience where the player could set the difficulty and make dialogue decisions. Chances are, players will probably pick something somewhere in the middle, using a tactical approach for major fights but breezing through the cannon fodder.

So will Inquisition only amount to the sum of its parts? It’s possible, but the developers are injecting it with new ideas that look to change up the BioWare formula. If you haven’t seen or heard of the Bioware formula, please look at the following graph. 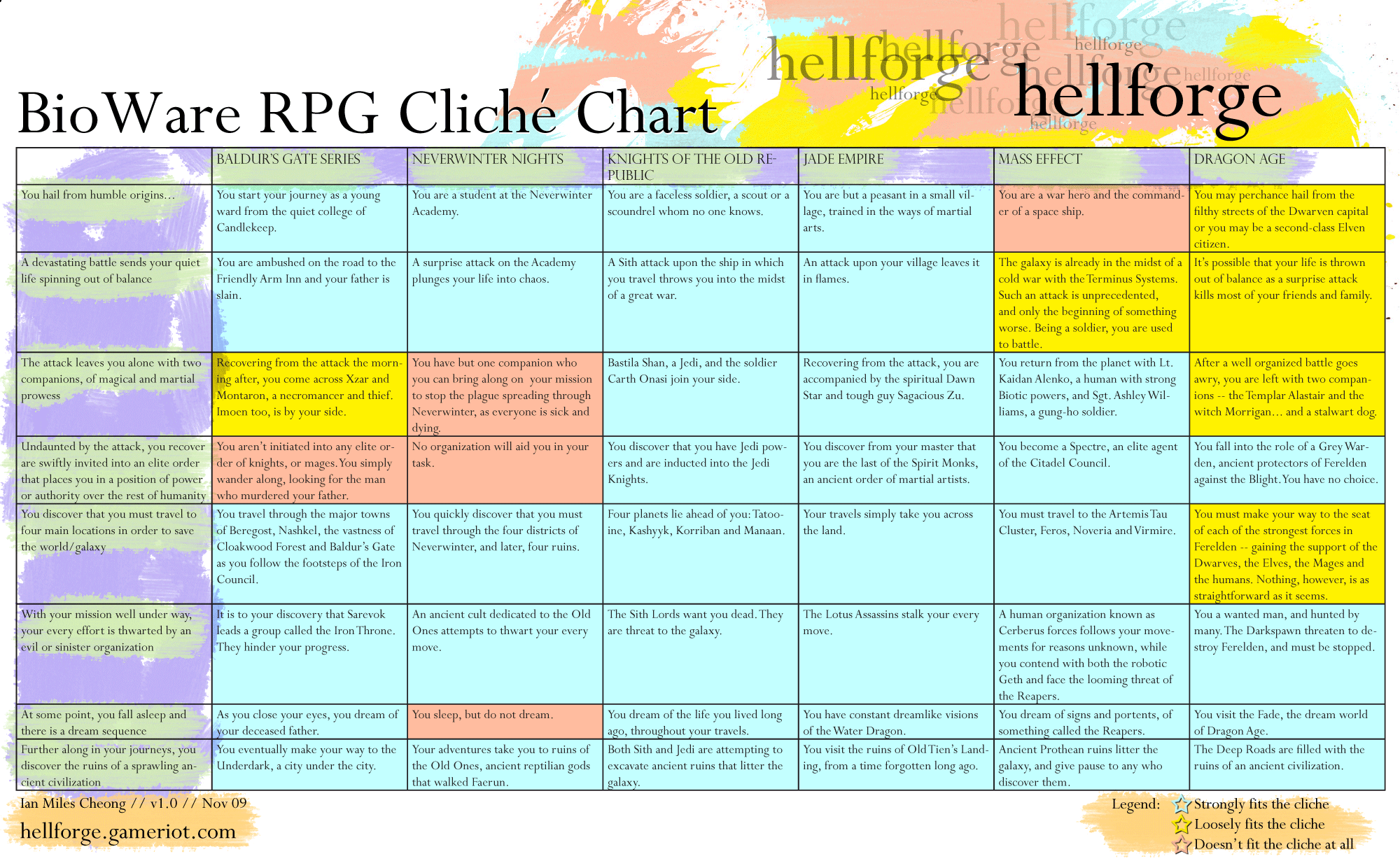 Dragon Age II, Mass Effect 2&3 are also guilty of many of these cliches.

Some of those things are inherent in fantasy tropes, not just BioWare: the sinister organization, the solitary survivor, the secret society, but the coincidences are still there to see. As far as similarities go, Inquisition will have the society for good, your character will likely be the lone survivor of a cataclysmic event, and some evil force will haunt your every step. But don’t they always?

To change things up, your character will actually be the head of the eponymous Inquisition. How it gets started is anyone’s guess until it’s revealed or we play the game. The developers have said how they want you to build your Inquisition from humble beginnings to a force to be reckoned with. At first, you may be lucky to gain an audience with an influential leader but they will be less likely to turn you down if you have an army behind you. Hopefully this implementation will be more interesting than Mass Effect 3’s recruitment gimmick, where you complete a portion of the game and it gives you a numerical value for each force you have on your side, and you have to fill the bar in order to get the good ending.

The Inquisition will also allow you to expand your influence and not just ideologically. The Frostbite Engine has so far been highlighted for its ability to destruct, but BioWare wants to not only destroy, but give the option to build. They want to give the player the opportunity to take over an abandoned outpost on a hillside and make it their own. It’s these sort of changes from previous titles that give me hope that they aren’t merely trying to make just a good Dragon Age game, but have their eyes on creating a great game that doesn’t rely on its predecessors for future success. 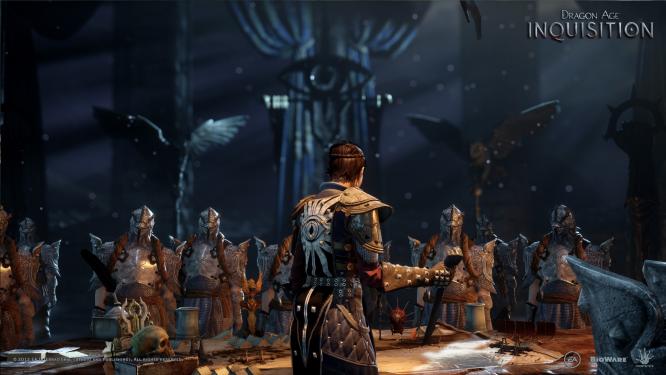 So far I’ve only spoke on the framework of the game and not the actual story, and it’s because we have to speak in very general terms since the details are sparse. We know that Ferelden is still recovering from the Blight and Orlais is in some sort of civil war. For people who haven’t played the first two games, it’s sufficient to know that in this fantasy world, a lot of business has been happening over the past ten years, which is approximately the time between the first game and Inquisition. The main plot seems to revolve around a tear between the realm of Thedas, the continent where your character lives, and the world of demons, dragons, and other nasty things. Previously, demons could only enter the world through a medium, typically a mage, which is why you will see a distrust of mages throughout Thedas.

The Inquisition you lead will not actually be toward mages, but against the things that come through the tear in dimensions. Other entities are too busy with their own problems to band together and they’re not likely to pay attention until you’ve built up your forces or until it’s too late.

Dragon Age: Inquisition will drop sometime in the fall of 2014 for PS3, PS4, Xbox 360, Xbox One, and PC. EA’s marketing will likely push this as hard as it pushed Mass Effect 3, so expect its impending release to be a high-profile affair.

Remember to pick up the September issue of Game Informer for tons of details and in-game screens.

Stealth Inc: A Clone In The Dark | Review

Rumor: GameStop To Offer Incentives To Upgrade Current Gen Games To Next Gen